This week as we considered how loving our neighbors shapes our relationships with ourselves, each other, and our world. Student’s displayed true examples of introspection, collaboration, and chesed (kindness). 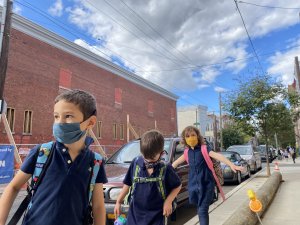 We sat together in the yard taking in the crisp fall air as we discussed different support systems. Learners talked about bridges and other physical support systems. Olivia and I made a bridge with our bodies holding each other up. I asked the students “what would happen if either of us let go?” As a group, we defined the word support. “It’s when something helps something or someone else.” one student volunteered. We moved into contemplation of various types of emotional support and students shared ways we can support each other emotionally:

We meditated on the idea of Betzelem Elohim (being created in God’s image) and considered the ways in which that universal connection changes how we treat one another.

We wove our thoughts together. Some students chose to draw their ideas, others chose to share verbally, and several kiddo’s wrote out their contributions. Students expressed that we can help one another, and lift each other up. One learner expressed this in a drawing of a person extending a helping hand. 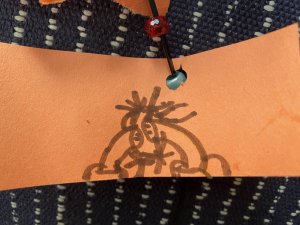 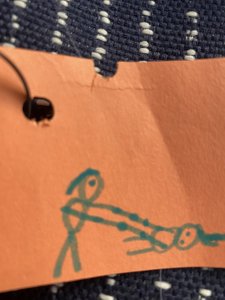 During Shulchanot Avodah one kiddo worked for a while on creating an upcycled paper towel tube bridge. Once she finished she was proud of her work, but her bridge was not able to stand. A few minutes later another kiddo came over. The two worked together showing their support and connectedness by literally helping one another build as well as collaborating beautifully. “I will hold it still while you use a whole bunch of tape,” one of them instructed. Once they finished they excitedly proclaimed, “Look! It can hold four heavy rocks!” and threw their arms in the air with excitement at their accomplishment.

Working together the learners were able to create something more ambitious. Once it was completed they titled the bridge “Say: I need help,” and discussed how it was now so much more than a bridge. 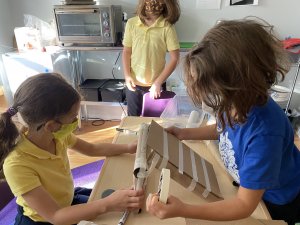 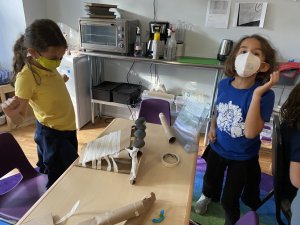 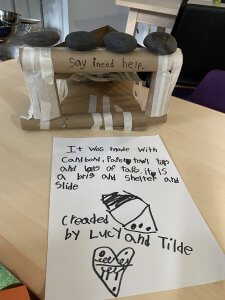 At another table two learners worked on sculptures that showcased their unique Godly qualities. One kiddo began working and then asked for more tools. Using the items he located nearby: pencils and rulers, learners got to work sculpting and engraving creation after creation listing their accomplishments, passions, and gifts.

“Cheetah’s are really fast, and I am really fast,” a learner stated as she carefully rolled out purple whiskers. “A taco because I cook every morning!” One kiddo proclaimed as he pointed down to his blue playdough taco shell. Students continued sharing their skills: swimming, being cool, and eating cake as they buzzed with glee mushed their works into new iterations. 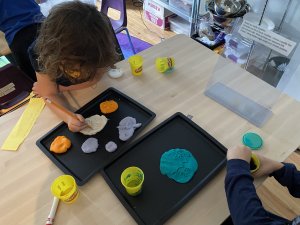 At another table a student worked independently while utilizing his gifts as a linguist, Torah commentator, and poet. He unpacked the language of the text we have been studying this week. He noticed that it was hard to truly change the core meaning of the text even when the words were moved around. Making a silly sentence he then translated it distilling the meaning just as we had during snack time learning. 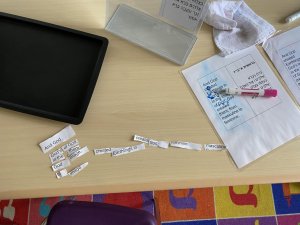 Translation: The creator of the universe, inside God, in the fastest amount of time possible, made people to be the same and be connected.

The learner reflected that he felt drawn to all of  the words except “masculine and feminine” which he didn’t feel connected to.

Students illustrated and collaged images for our peace walk. Then we reflected on the ways in which problem solving with kindness expresses our support for one another. Learners considered what helps them feel calm. A few kiddos showed the example of taking a deep breath. Kiddos used props from the classroom including our favorite mascot, the puppet Mr. Fireman. We posed Mr. Fireman to demonstrate the act of taking turns listening to each other’s needs. We decided to give him speech bubbles saying: “Can I have that” and “Once I am done you can have it!” 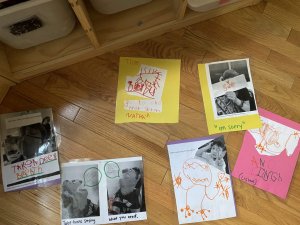 Every time I turned around these brilliant kiddos were growing, expressing kindness, and offering support to each other filling me with joy and nachas (pride).

Next week we’ll be learning about the importance of diverse perspectives, self-care, and treating others with respect.