On Tuesday, kiddos joined up for a delightful and energetic day of camp at both Center City and South Philly Locations.

Kiddos in Center City started with some games, sang the “Moose Song,” and took advantage of the dry morning weather to gather leaves from Rittenhouse Square for a leaf rubbing activity. Kids then chose between a yarn craft and dying pumpkin seeds for an art project later in the day. We also played some silly games, like a game in which we went around in a circle saying one thing while doing another. 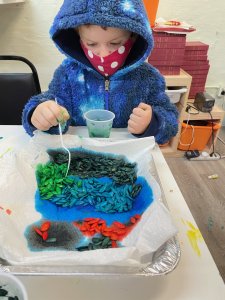 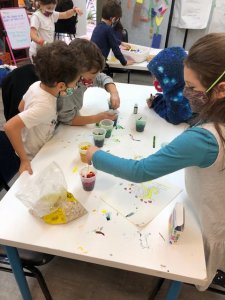 In the afternoon, we played a game where kids worked together to cross from one side of a “river” [the classroom] to the other, while stepping only on “stones” [pieces of paper] of which there were not enough for everyone. Similar to the discussions about “roles” in the previous week’s Jewish Enrichment, we saw how different kids took on leadership in different ways: 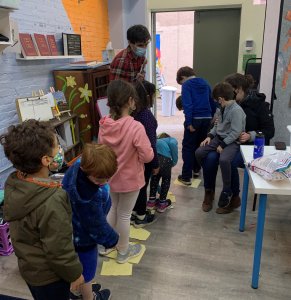 Kids reported that the game made them feel a mix of things, from happy to worried. We talked a bit more about decision making processes, like voting.

Our day ended with gluing on our pumpkin seeds, tefilah, and a game of “What Time is it Mr. Fox” in the alley. 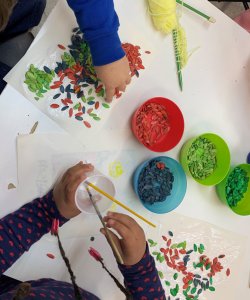 In South Philly, learners were excited to share all that they knew about Election Day. After an enthusiastic discussion about voting, we worked together using the democratic process of voting as we engaged in a game called, Crossing the River.

After kiddos arrived we jumped into a discussion about what voting is and why we vote:

Then we brainstormed ideas about how else we can make change:

Once we presented the learners with the rules to Crossing the River they began sharing their ideas with one another about how to approach the objective of the game, crossing the river with minimal river stones. Kiddos took turns presenting their strategies and then voted on which approach they should use. The first round didn’t quite work out, not everyone made their way across the river. We regrouped. Students came together and reflected on how they might approach round two. This time they voted again and their votes were informed, it worked! 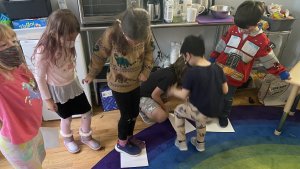 As we wrapped up Olivia asked: how else might we help or protect each other?

One kiddo shared: “we could build a fence around a roof so no one falls off!”

This was a wonderful connection to the text we are studying this week from Deuteronomy 22:8 where we learn this exact sentiment! 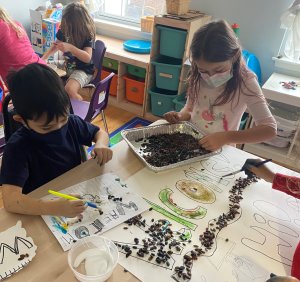 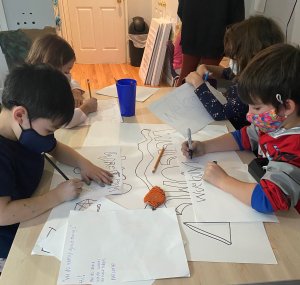 These kiddos are wonderfully empathetic and caring! We can’t wait for the next camp day.