It has been a delight to watch each learners’ interests take off in their independent Rosh Pinah projects! These projects are building on what we previously learned about tefilah (prayer).  We looked at the history of when Jews started praying in addition to, and eventually instead of sacrifices and temple based worship. We learned about the role of early rabbis in that transition. We learned about the 7 main sections of the daily service, and 5 main sources of origin of the tefilot text. After that, everyone chose their own topic to learn more about and create some sort of project around independently. 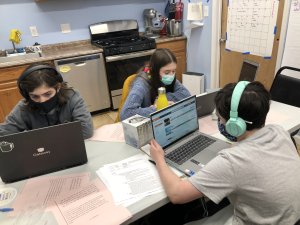 Two learners are focusing on learning about specific tefilot– new melodies for tefilot we do in our daily service, and learning about specific tefilot connected with Jewish holidays. Another two learners were fascinated by the story of a rabbi from the First Temple period who played a significant role in crafting the Amidah, and they have been learning more about him, the time in which he lived, and the significant contributions he made to tefilah. One learner wanted to know more about Jewish people’s experiences with tefilah, so she created a survey that we shared on Facebook, and within a few days she had almost 100 responses! She is now working to identify the trends and stories that are present in the data she received.

Within these varied interests, there is also a lot of overlap in motivation and curiosity, and our learners have been very interested in learning about each other’s projects and supporting each other’s efforts. A 5th grader realized that her project has some overlap with a 7th grader’s project- in that they are both motivated by what makes tefilah an engaging experience for them and for other Jews. The 5th grader asked to see the survey and suggested a specific question about people’s preference between traditional and modern tefilah melodies, both to enhance the depth of the survey and because it would support her own investigation as well. They have continued to spend some of each Rosh Pinah project time working together, asking each other questions, and talking about what they’re learning. 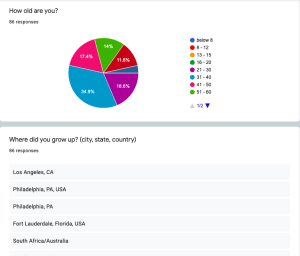 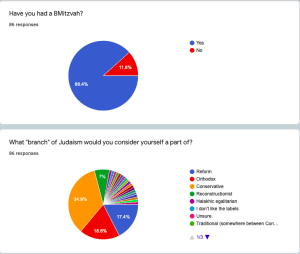 In our continuing studies of Vaykhel, we have been talking about what are one’s own skills and gifts they bring to the community. In these conversations, learners have reflected that it can sometimes be hard to identify them for themselves. When asked what their skills or gifts are, learners responded with:

Yet, when the question shifted and it was asked “What are your skills or gifts that you can share with your community?”, the answers changed!

Finally, some learners remarked that it would be helpful to hear what other people think their gifts are. We are going to explore this in the coming classes, so stay tuned!!

In other exciting news, now that our entire class who attends in person is fully vaccinated, we can stay inside for tefilah! 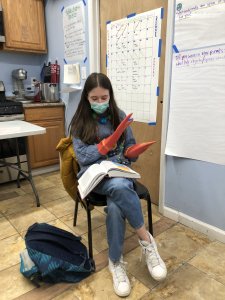