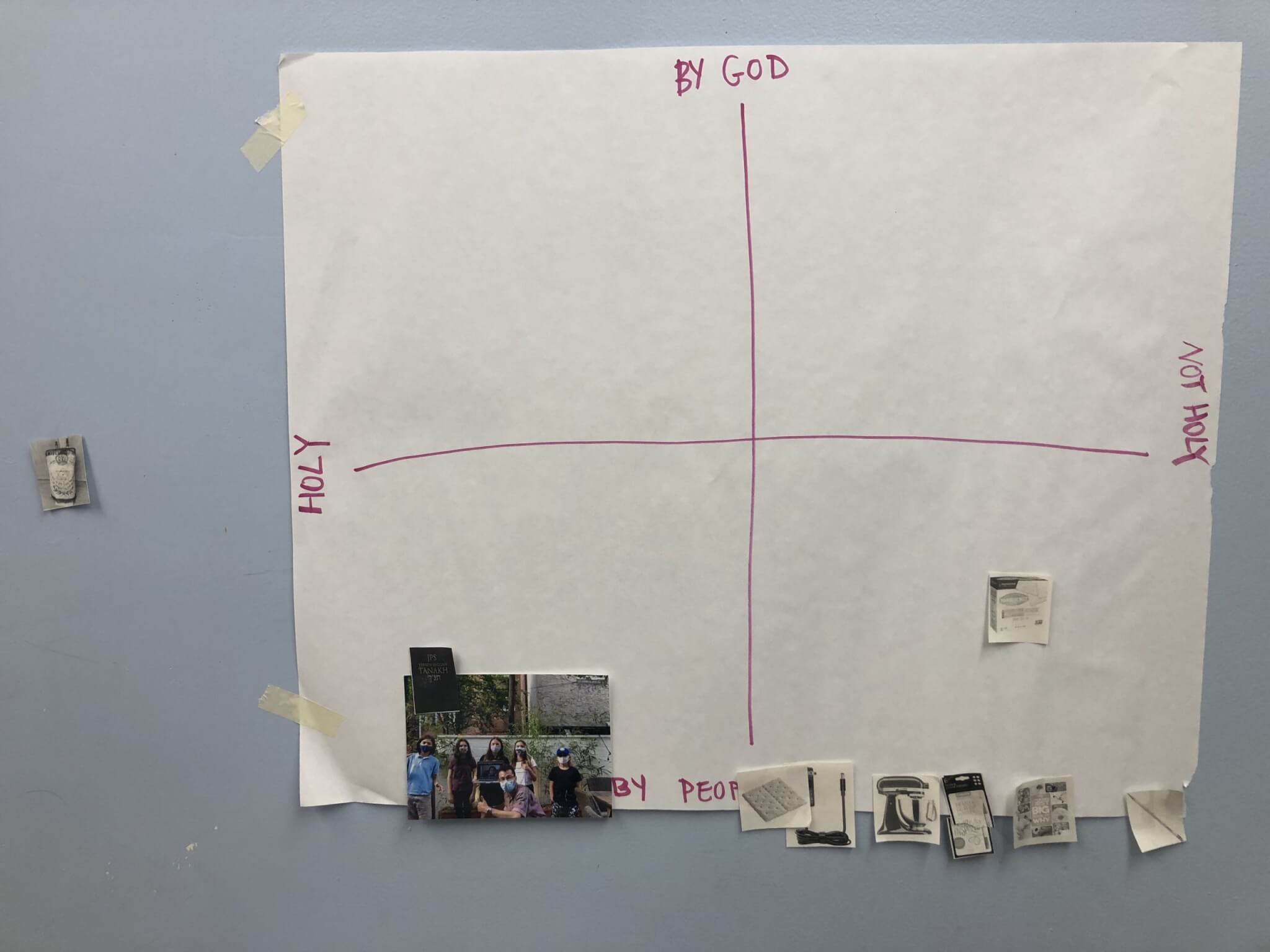 Last week we began studying parshat Vayakhel (For more information about Vayakhel, here is a great article to check out!) and made really good juicy next steps on Rosh Pinah projects.

To begin Vayakhel, we engaged with a big quadrant chart on the wall labeled “holy” on the left, “not holy” on the right, “by God” on the top and “by people” on the bottom, with about 10 images of a range of items for them to place where on the chart was the right place. It was a lively collaborative process with the whole class working together, and each time an object got moved to a significantly different quadrant, we had a discussion about the differing opinions. The overall place everything ended up was in the bottom half of the chart- so everything either midway or closer to being made holy by people than by God.

The Torah was placed on the wall beyond the edge of the “holy” side.

Whereas the Tanakh was placed on the chart and further towards “by people” than the Torah was.

And the unanimous decision to place an Oreo as far off the chart as possible towards the “holy” and “by people” quadrants, that it ended up across the doorway right where the wall meets the floor

We continued this exploration by looking at the definition of the Hebrew word kadosh, which means holy and in Sefaria is defined as: “Apartness, holiness, separateness, apartness. Of God, of places and of things.” It was decided that we needed to add “of people” to the definition. Learners had varied opinions about whether they agreed that holiness could be connected to God:

And with regards to places:

There was confusion about why the word “separate” was used here.

And we were able to make the connection between the phrase from havdalah, “Hamavdil ben kodesh l’chol” which is about separating the holy from everything else.

Before diving into the first part of the parsha, we made a summary of all the events that happened from the end of Vayishlach (the last parsha we studied) until the beginning of Vayakhel, summarizing the path that took B’nai Yisrael (literally Yisrael,  or Yaakov’s  children and family) to Egypt and through the Passover story to where we find them in the midst of Exodus, still at the base of Mt. Sinai. In the first half of chapter 35, we read the descriptions of all of the many parts of the mishkan, and pulled out some key Hebrew words of many of these objects that we were familiar with or were new to us, such as ohel (tent), aron (ark), menorah(lamp), or (light) and shemen (oil). 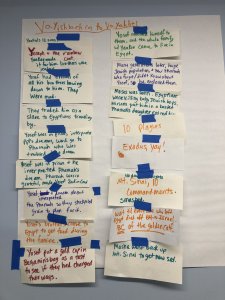 When asked how they would feel if Moshe had asked them to build this structure, they had a range of responses: