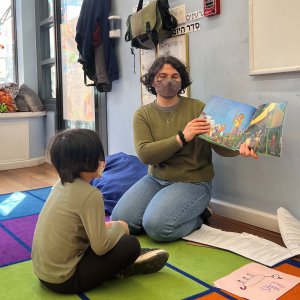 Garinim (kindergartners) love this story. Everyday, when we pause the narrative, they shout and want to hear more! Here’s some of what we unpacked last week.

There was a couple, Yocheved and Amram, who had a baby boy. They hid him for three months so Pharaoh couldn’t have him thrown into the Nile. Then, when they couldn’t hide him any longer, Yocheved sealed a basket with tar, put the baby inside, and left him hidden in the reeds along the Nile under his sister Miriam’s watchful eye. Batya, Pharaoh’s daughter, found the basket and saved the baby, whom she named Moshe. (Exodus 2:1-10)

Imagine you’re Yocheved. What are you thinking and feeling when you choose to put your baby in the Nile river?

This story has lots of important women characters. How would you describe them?

Who are the women in your life who are similar to Batya, Yocheved, and Miriam? 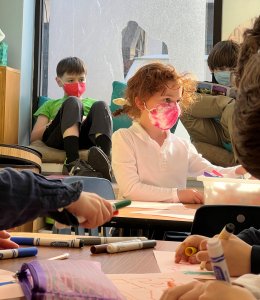 Moshe grows up more, and one day notices a Mitzri taskmaster beating an Ivri (Hebrew) slave. He looks around, and, seeing no one about, hits down the taskmaster and kills him (Exodus 2:11-12). What’s going on here? What was this experience like for Moshe?

Do you think Moshe did the right thing or the wrong thing?

What do you think you would have done? 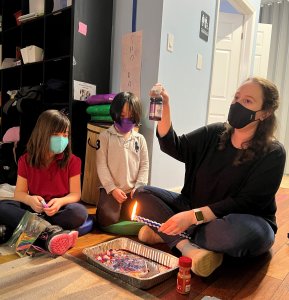 Shorashim (1st-2nd graders) started out the week with a silly story called, “The Day The Babies Crawled Away” by Peggy Rathmann. Before the story, we thought about what it meant to be an upstander versus a bystander. Learners agreed that they would rather be an upstander but recognized that there are certain situations when they feel unsafe to physically intervene in a situation but could tell a grown up instead.

Kids thought of a time when someone was a bystander or an upstander:

Kiddos empathized with Yocheved and how difficult it must have been to give up her child, then get her child back to nurse him, and then have to give it back again. Kiddos reflected that when faced with an emergency or tough situation, it can be difficult to make a quick decision.

The next day, we gave learners a few scenarios:

Kids all around felt that everyone does bad things but can still be good people, also, that Moshe would have benefited from using his words instead of just reacting. 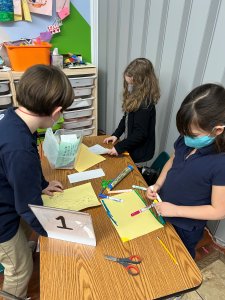 This week, Nitzanim (3rd-5th graders) explored the events of this story and how they connect to how we became Jewish people took many forms! One way Nitzanim did this was to imagine the inner monologue of some of the characters. Kiddos took turns acting out their interpretations of what was going on in the minds of characters like Yocheved, Moshe’s mother, when she sent him down the Nile in a basket, and Batya, the Pharaoh’s daughter, who took Moshe in.

Here were some reflections:

Nitzanim also enjoyed a documentary that followed archeologists studying ancient Egyptian artifacts, people, and buildings from around the time Exodus was supposed to have taken place.

We took a look at the part of the story in which adult Moshe intervened upon finding a Mitzri (Egyptian) taskmaster abusing an Ivri (Hebrew) slave, and later on intervened between two Ivrim (Hebrews) fighting. Using legos and natural building blocks, we imagined how the different characters might have been feeling. Some creations included:

As we explored the next portion of the story in which Moshe confronts two Ivrim (Hebrews) arguing, we rolled a giant, foam, 12-sided die to answer questions about what took place. Kiddos had some fascinating ideas about this tex:

What is one thing Moshe could have said to the Ivrim to help them resolve their conflict?

What is one thing Moshe could have done instead of running away from the Pharaoh?

Nitzanim continues to guide our conversations in fascinating directions. 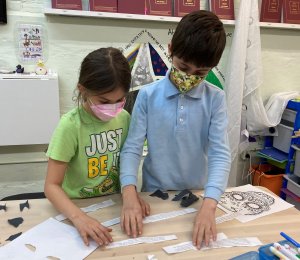 We are curious to see what kiddos will think of the next bit of the story! Tune in to see what happens!