This week, learners delved into text and examined Pharaoh’s reaction to Moshe and Aharon’s request for Bnei Yisrael to retreat to the wilderness to worship God. We also considered Bnei Yisrael’s resentment towards Moshe and Aharon for their attempts to free them. Learners also explored the demonstration of God’s power as the first plague turns the Nile into blood, causing all the fish to die and poisoning the water supply. 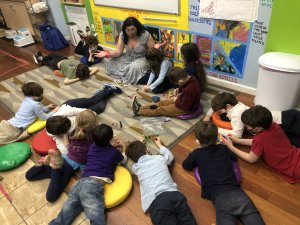 What are you free to do? Unlike the Ivrim (Hebrews) who have to work all the time as slaves in Mitzrayim (Egypt), we have the freedom to enjoy a lot of things. Here are some of the ideas the Garinim (kindergartners) brainstormed:

How do you think Bnei Yisrael (the Jewish people) felt not being able to do those things that we’re free to do?

Moshe and Aharon approached Pharaoh and demanded that he allow Bnei Yisrael to go into the wilderness for three days to pray to God. Pharaoh refused, not caring what this Ivri God had to say. He also decided that he would no longer provide the Ivrim with straw to make bricks, but that they would have to make just as many bricks as before. The slaves were angry with Moshe and Aharon and despondant about their new work conditions. When Moshe and Aharon tried to console them, reiterating God’s promise to get them out of Egypt, Bnei Yisrael couldn’t listen to them – they’re spirits were crushed by the harshness of slavery (Exodus 6:9).

Has anyone ever tried to tell you something that was hard for you to believe?

This week, our learners experienced the monumental shift from wearing masks all the time at school and at Makom Community to having the option not to anymore. When we asked the Garinim how long they’d been wearing masks for, we got answers ranging from “like six months maybe?” to “a thousand years!” Like the conditions of slavery for the Ivrim, masking seems to have been going on for our kiddos basically forever. We wondered how kids were feeling about the sudden possibility of unmasking. 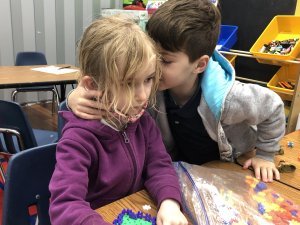 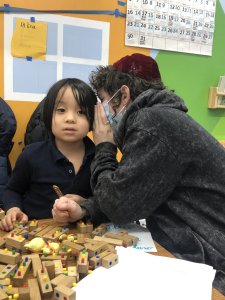 Shorashim (1st-2nd graders) started the week with a silly game to empathize with the Ivrim when Pharaoh’s new demands made it impossible for the Ivrim to make the same amount of bricks. Kids split into groups and had 2 minutes to sort a pile of legos by color. Teachers then mix up the legos and kids sort again but with one hand behind their back. Then teachers mixed it up again but kids still had to have one hand behind their back except for one kid who has both hands behind their back. Each time having 2 minutes to build.

There were many mixed reactions from our learners:

After reading the text, kids reflected that they sometimes feel like a failure when they are asked to do the impossible and not getting it finished.

Teachers ask kids how it made them feel when teachers kept adding more and more obstacles but expected the same outcome? Instead of hearing some feelings, kids immediately starting coming up with solutions and different ways to take action about this injustice: 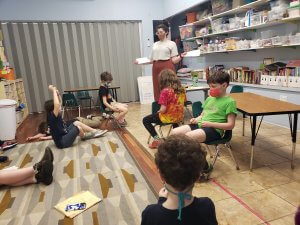 Later in the week, we focused on a different piece of text, where Moshe and Aharon went to  Pharaoh and asked them to produce a sign/marvel. So they did what God commanded and threw down a staff on the ground before him and his officials, and it turned into a snake. Then Pharaoh’s two wise men (magicians) did the same trick with their staffs, but Moshe and Aharon’s snake ate the two magicians’ snakes. Pharaoh’s heart hardened and he ignored Moshe and Aharon.

Teachers proposed the question: Do you think the stories in the Torah are real?

Do you think stories in the Torah can teach us things?

We then watched the snake scene from the Prince of Egypt and we pointed out the similarities and differences. Minus the theatrical song the magicians sing, kids thought the scene was relatively similar to the text but had a few embellishments.

Why do you think the movie made changes to the story? 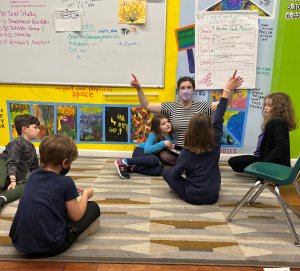 Now that Moshe has received God’s instructions to return to Mitzrayim for the first time in years after fleeing the land, Moshe faces the Pharaoh. He relays God’s message to Pharaoh, demanding he free the enslaved Ivrim so that they may celebrate God in a festival in the midbar (wilderness). Nitzanim (3rd-5th graders) unpacked why this festival should take place in the midbar and we imagined how we would plan our own festivals, if we had the chance! We came up with two different settings: 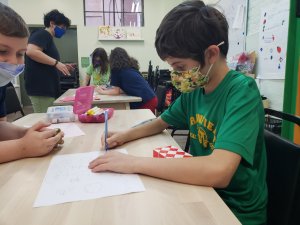 Inspired by our imagined festivals, we did some tefilah in the dark, sharing a really peaceful and spiritual moment. We listened for God in the darkness in silence before doing the Shema prayer.

The more we read texts about God, the more names we learn there are to refer to God! We hear God refer to themselves as El Shaddai (The Almighty Provider). How does God as the Almighty Provider compare to God as HaShem (The Name)? Nitzanim discussed how different names serve different purposes depending on context. We related this to how all of us have different names depending on where we are! How does it feel when people use these nicknames that we like? Here’s what Nitzanim had to say:

Learners have begun drafting plans for how we’re going to use all the sticks and leaves we collected from Rittenhouse for building our very own burning bush. We can’t wait to combine all of our ideas and get creative! 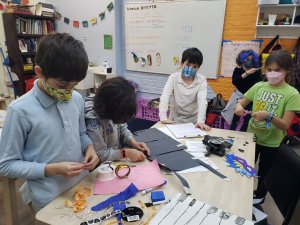 Next week is Purim! We have some many silly and joyous plans for kiddos!