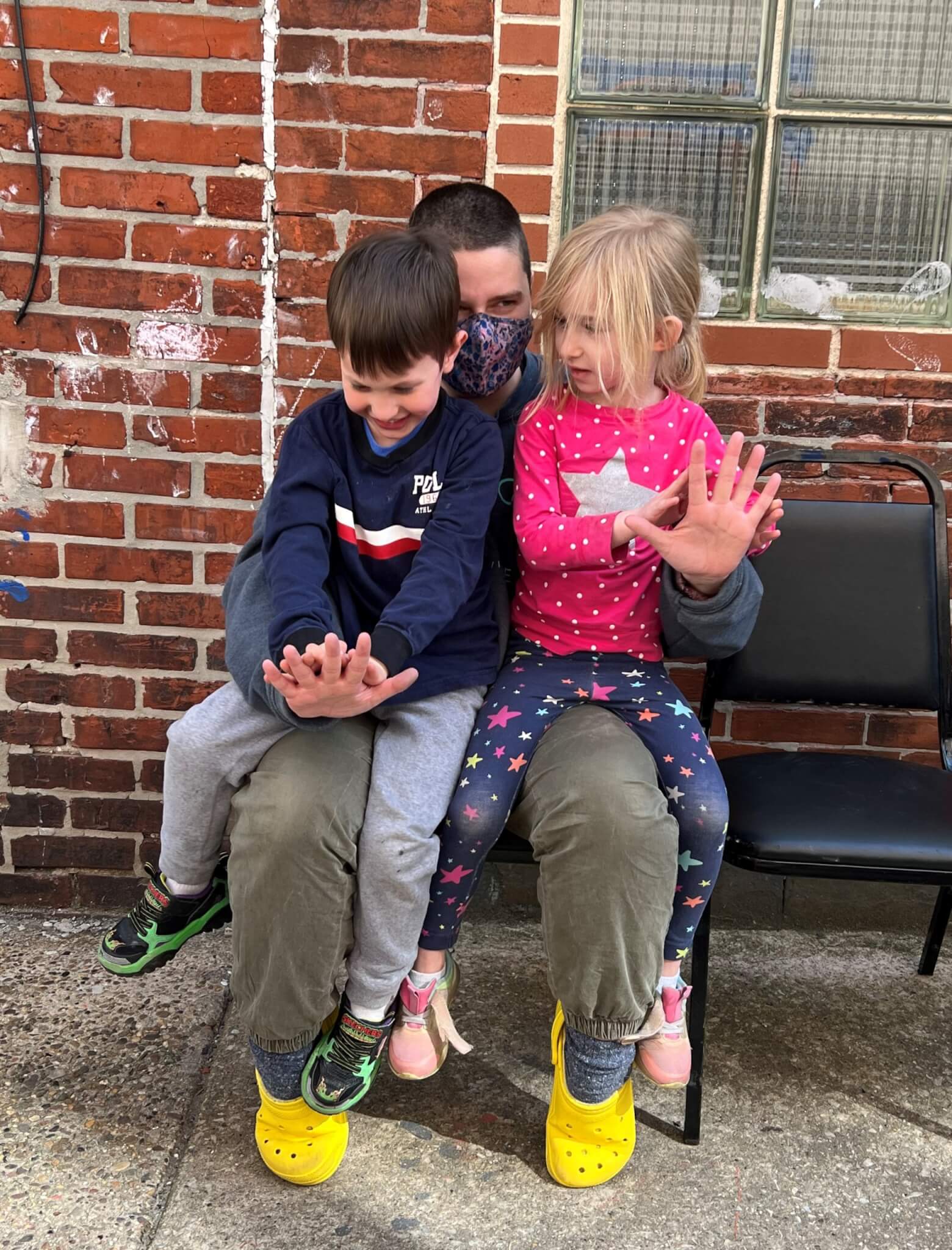 Makom Community’s Spring Break Campers had an energetic, creative, and collaborative week at Spring Break Camp: “Earth Week”! Our week was full of nature-inspired crafts, scavenger hunts, and building, all with a Jewish twist. 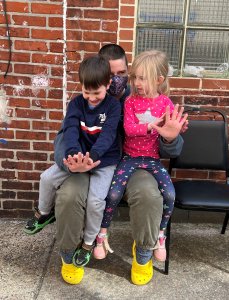 We started the week with things that grow, like flowers, trees and other plants. We broke the ice by taking a personality quiz, called, “Which edible flower are you?” with four possible results being: dandelion, sweet violet, honeysuckle, or daylily. 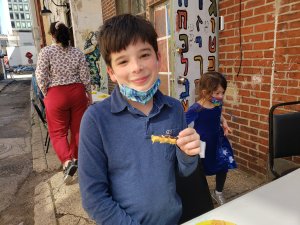 To kick off our activities, learners discussed this text from Koheleth Rabah 7:13:  “Upon creating the first human beings, God guided them around the Garden of Eden, saying “look at my creations! See how beautiful and perfect they are! I created everything for you. Make sure you don’t ruin or destroy MY world. If you do, there will be no one to fix it.”

Kiddos said their big takeaways from this text were “don’t destroy the things that people create” and “preserve the good things you have”. We considered that there is more than simply “not destroying” the earth. Here are a few things learners do in their lives to keep the world safe and whole: 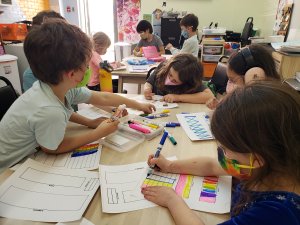 The kids thought this text was so interesting! Everyone had a chance to roll a big foam 6-sided die to determine what questions they would answer. Here are some of our answers to the questions:

Why does this text say not to reap all the way to your corners?

How might we honor this text if we aren’t a farmer?

Why does this text also mention stealing?

How would you feel as a hungry stranger to see food left in the field for you?

Campers then created stunning tactile flowers out of paper plates to illustrate the hidden holiness in nature and to capture the beauty and colors of springtime. They used white and light colored crayons to draw and write secret, holy messages (nicknames for God, words of hope, passages from Birkot Hashashar, among others!), then revealed the messages with watercolors. The results were beautiful and moving 3d floral masterpieces! 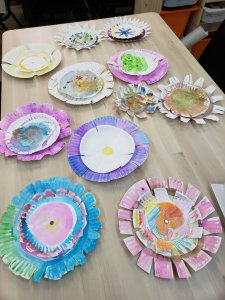 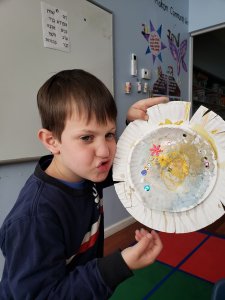 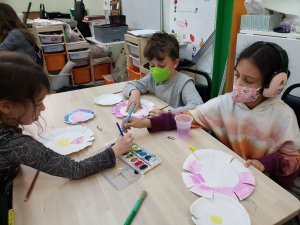 Campers completed a “Great Garden Games” obstacle course challenge during where they had to crawl through a tunnel to represent germination, held “tree pose” to grow their roots, sprouted silly hats instead of leaves, jumped up and down to “replant” themselves outdoors, grew and thrived by grabbing scarves ad costumes pieces,  dropped “seeds” into baskets, and brought joy to each other by crafting secret handshakes. After all of that, the fully grown “plants” returned to the beginning of the course and laid down to decompose before having the chance to run through the whole cycle again!

At Tefilah, learners had a chance to practice gratitude from the perspective of a flower. When asked “what might a flower be thankful for?”, this is what they said:

Our next theme was “decomposers”, and we spent the day learning about, discussing, and unpacking the roles of fungi, bacteria, and insects in our ecosystem.

Our discussion focused on defining decomposers and considering their importance. After coming to an understanding of how the natural world handles death, we also discussed what we know about death and mourning in Judaism. We discovered why the word shiva has the same root as the number sheva (7), and reflected on the ways that a Jewish community works together to care for mourners (by feeding them, visiting with them, praying together, etc.).

We watched an awesome video of mushrooms “talking” to each other, and marveled at the ways they communicate. It turns out fungi even say distinct words! The kids thought we might be able to communicate equally well and practiced this skill with the classic game, whisper down the lane! 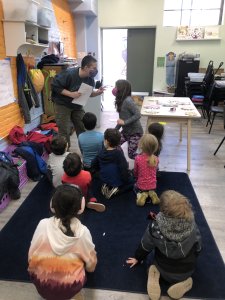 For electives on Tuesday, learners got to choose between three different options. Some used playdoh to sculpt the different parts of a mushroom, some used white mushrooms to make colorful stamped patterns with tempera paint on paper, and everyone else enjoyed a fancy mushroom tasting menu, sampling sauteed crimini, shiitake, maitake, lion’s mane, gold oyster, blue oyster, king oyster, and cinnamon cup mushrooms. Learners liked the king oyster and cremini best, but agreed they’re all very tasty when cooked in oil and salt!

Wednesday morning was filled with industry and cooperation! Campers watched a video highlighting 10 Eco-Friendly and Sustainable Houses, and then came together to discuss what was special about what humans have built on this earth! Reflecting on the video, the favorite homes we saw were:

We challenged the kiddos to imagine and create an eco-friendly and sustainable home of their own! We asked what Jewish ritual objects could we include in our homes:

Learners then took their reflections and inspiration and spent the rest of the time until lunch diligently cutting, taping, gluing and decorating incredible, thoughtful, creative, world-saving architectural creations. We were so impressed with the way learners worked together, solved problems, overcame setbacks, and waited patiently for help. 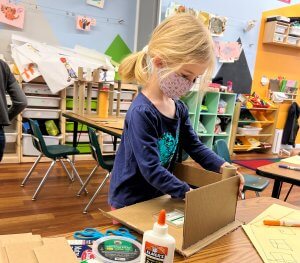 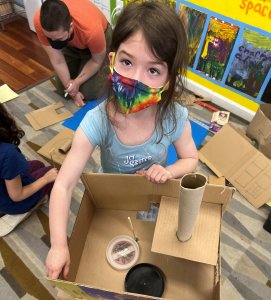 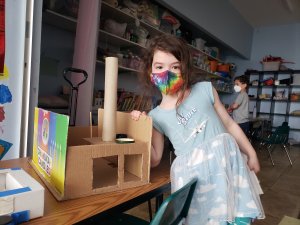 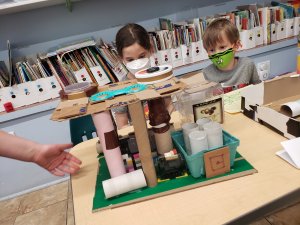 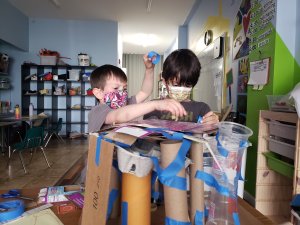 Later, we read the story of the seven days of creation, with learners helping to tell the story through hand motions and gestural movement! After reading the text, the kiddos wanted to know a few things:

We were so energized by the idea of making music! To get pumped for the end of the day, kiddos played several rousing rounds of freeze dance. Many learners got to request songs they love and we had a great time dancing like different animals and practicing our collaborative skills by following different leaders as we danced. 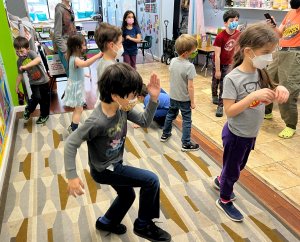 After learning about plants, decomposers, and what humans have created, it was time to consider the last piece of the saving the earth puzzle…taking care of ourselves! Learners began the day by splitting up into groups and learning different breathing techniques for emotional regulation. We tried:

Learners came back together and each group taught the rest their technique and then we discussed when they might be useful. Kiddos thought this might help:

We talked about the Jewish pre-pesach ritual of cleaning out the unleavened bread from your home, and considered the ways we might also clean out that which is “puffed up” inside ourselves. What counts as something “puffed up” in a person? Learners decided:

After doing a scavenger hunt to find the last little bits of chametz in the Makom Center City classrooms, we gathered to consider what we could do to the pieces of challah to make it “not food” anymore. We could:

For electives, some learners chose to watch “Curious! The Musical”, an original musical puppet show about two kids who organize their town to protest an oil refinery. Other learners discovered the value of practice and patience with a tricky but super fun weaving project, using paper straws to weave yarn bracelets. The bracelets felt soft like blankets and hopefully help kiddos remember to take time to rest and rejuvenate.

In the afternoon, we took advantage of the gorgeous weather and took a lovely walk to nearby Rittenhouse Square, where we took over an empty water fountain and had a blast playing tag, drawing with chalk, and yet again picked up our watercolors to capture the beauty of the natural world around us. The kids lined themselves up on one wall of the fountain and happily painted away until it was time to head back. 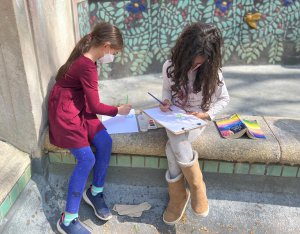 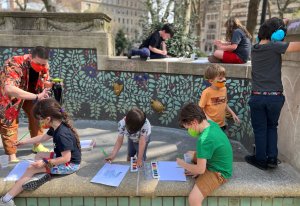 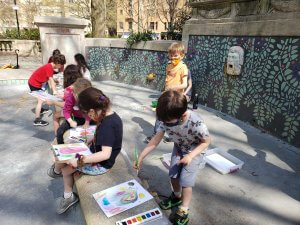 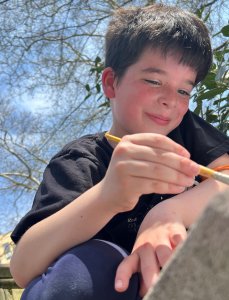 We closed out the day (and week!) with a spirited Tefilah outside on Ionic Street. Learners practiced the four questions (Ma Nishtana) every day and by the end of the week, they were total pros! As we said goodbye, kiddos left with many beautiful art projects, running jokes, new friends, delightful memories, and big smiles! 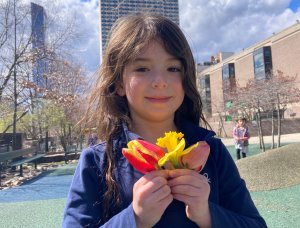