Makom @ Home kiddos have been writing their own commentary on the Exodus story as we read about how Bnei Yisrael (the Jewish people, originally the children of Yaakov AKA Yisrael) were enslaved in Mitzrayim (Egypt). In the early weeks of the story, one of our learners requested artsploration in addition to textsploration, so we introduced many of our texts with an image that either reviewed the previous class’s topic or previewed the current class’s content. Our learners enjoyed exploring plagues depicted in legos, paintings and computer generated image.

We imagined how Yocheved, Moshe’s birth mother, felt and what she was thinking when she put her baby in the river to save his life:

We read that Moshe was a reluctant leader who wasn’t sure he was up for the task of leading Bnei Yisrael out of Mitzrayim. We brainstormed strategies that can help when we feel like a task is just too hard:

One learner wondered how God talked to Moshe. We discussed a few possibilities and she illustrated her idea: 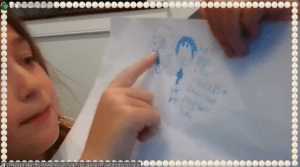 We thought about how Bnei Yisrael felt when Moshe and Aharon went to Pharaoh to try to set them free and Pharaoh responded by making them do additional work:

We also connected the text to our own lives and shared our experiences of when we ever had an experience like that, a time when we tried to be helpful or fix a problem and end up with more of a mess.

As we read about each of the plagues, we noticed the impact on people, animals, and plants. We wondered why these things were plagues if they didn’t affect everyone or if some people actually liked them. We shared things that bother many other people, but don’t bother us:

I love watching how our learners engaged with the text and made it their own, whether retelling the story in emojis or empathizing with different characters. I can’t wait to see what they’ll teach me next!