How did we become the Jewish people? This week, we started a new unit! We read Exodus 1 where we discovered how B’nei Yisrael (Hebrews) ended up in Mitzrayim (Egypt) in the first place! A short gist: A new Pharaoh rose to power that did not know about Yosef and made all of the Ivirm slaves. There were SO many Ivrim and Pharaoh was worried that they would start an army against him, so he ordered two Ivri midwives to kill the baby boys. The midwives, fearing God, told Pharaoh that the ivri women are unlike the Mitzrim (Egyptians) women, they are so strong that by the time the midwives get there, they have already given birth. Pharaoh didn’t like this very much and ordered all taskmasters to throw the baby boys in the Nile.

Using wooden characters, natural building materials, felt, and our imaginations, Garinim (kindergarteners) became part of the story through Godly Play. By hearing a segment of the story each day, we were able to imagine what the characters may do next and how they might feel. This line of thinking continued into our Shulchanot Avodah (activity centers), which invited our students to make puppets of the characters, interview them, and practice writing their names in Hebrew. 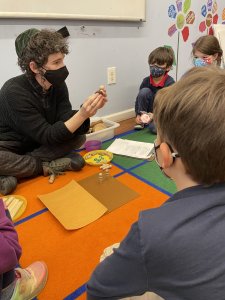 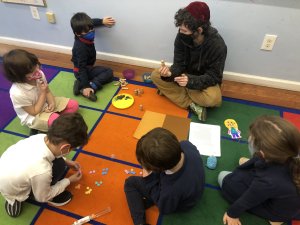 When kiddos interviewed each other’s characters, this is what they had to say about the favorite part of their job:

Hardest part of the job:

Our kiddos became entranced in the story and wanted to add to it, spontaneously building the twelve sons of Yisrael out of fidgets and counting them in Hebrew. We were so excited to see our kevutzah engage in different ways.

When we discussed why the midwives, Shiphrah and Puah, might not have listened to Pharaoh (who did not know Joseph)’s orders to kill the Ivrit baby boys: 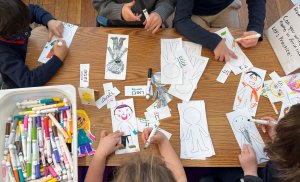 We learned about some pretty serious stuff in Shorashim (1st and 2nd graders) this week. On Monday, we did a dramatic retelling (with silly costumes of course) of One Crazy Time/Mi Chamocha, a prayer we sing during Tefilah but threw in some questions to get kiddos to think about the story from the characters’ point of view. 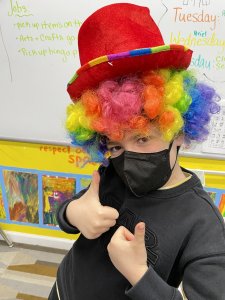 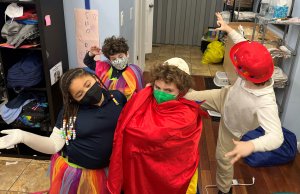 Learners were taken aback by the bit of the text where, after an unsuccessful plan with the Ivri midwives; Pharaoh instructs his taskmasters: “Every boy that is born you shall throw into the Nile, but let every girl live.”

We explained to kiddos that during that time, women were not allowed to fight in an army because they were thought to be weaker than men. Because the Ivrim were so large, Pharaoh was afraid that the Ivri men would start an army against Pharaoh. This seemed to make a lot more sense with kids but many were still adamant about how women are not weaker than men. So true!

Later in the week, since so many learners are interested in STEM, we watched a video that explained what happens in our brains when we have a big feeling.

We compared these big feelings to the ones the characters in the text might have, like Pharoah and his fear and anger towards the ivrim and the midwives in their fear of God and Pharaoh. We talked about how it is always okay to feel big feelings and we brainstormed ways we can physically feel those feelings in a safe way.

For shulchanot avodah this week, kiddos unleashed their creativity and created shoe puppets of the characters in the text, we challenged them to complete a Pharaoh inspired crossword, and set up Hebrew bingo which was a big hit! 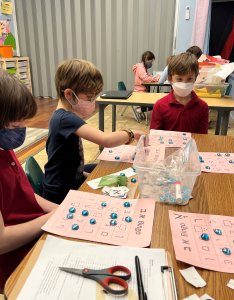 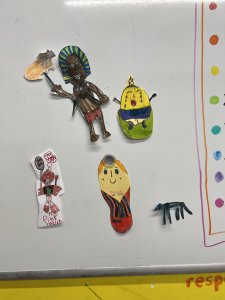 This week Nitzanim (third, fourth, and fifth-graders) dove into the beginning of the Exodus story. These kiddos love a narrative with characters! We explored the story using various modalities including shoe puppets, skits, comics, and retelling the story on one foot (shoutout to Hillel).

In this part of the story, we learn about when the new Pharaoh ruled over Egypt and was threatened by the growing Ivrim population. After ordering Egyptian midwives to kill ivri baby boys, the two disobeyed to protect the ivri children. What better way to lighten up a rather dark tale than making shoe puppets for each character? Tracing their shoes and creating costumes and funny faces, kiddos retold this story with their puppet creations attached to their feet. 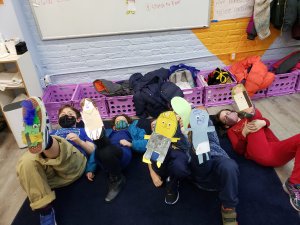 We imagined what Pharaoh might have been feeling when he ordered this violent act. Here were some thoughts:

In another retelling of this story, learners fashioned costumes out of construction paper and created an interpretation of the story from the perspective of the Pharaoh’s dogs. We also imagined what characters were feeling when they made critical choices! We then imagined alternative choices characters could have made. 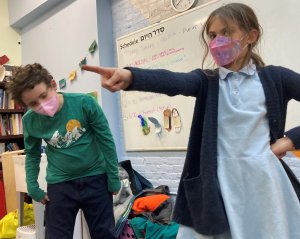 It was interesting to imagine new ways the story could have gone.

Nitzanim is working hard on mastering Tefilah (prayers)! We’re working on agreeing on an award for when each kiddo reaches their goal. 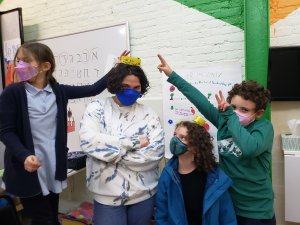 We have some awesome and caring kiddos at Makom. We can’t wait to see what our learners will think of next week’s text! Until then!