This week we continued our unit three learning exploring the Exodus story!

All week I watched students absorb and embody this story through building, play, art, puppetry, dress-up, and more. It was such a joy to observe students immersing themselves in this essential story of the Jewish people, a story they know well already and are eager to expand upon. 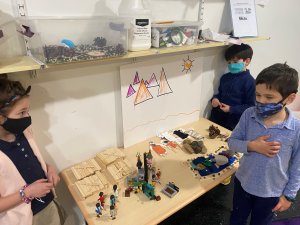 As we began the narrative, Garinim (kindergarten) learners drew what they heard and Nitzanim (1st-4th grade) learners embarked on their self-directed project of re-telling the story in their own words.

A passage from Nitzanim’s recap of Exodus 2:1-25

“All these people came to Egypt. They met Yosef there, but then a lot of them died. All the others made more people to fill in the gap. They were called Bnai Yisrael, and there were so many of them. Originally there was a King of Egypt who was OK with the Hebrews, but then he died. There is a new king of Egypt who hated the Hebrews because they were different, like how Donald Trump hates people of color and Columbus was afraid of the Native Americans. This King is going to “take care of” the Hebrews, AKA kill them. This is because he thinks the Hebrews might join the Egyptians’ enemies and make even more enemies. The Egyptians sent people who forced Bnei Yisrael into working very hard for the Pharaoh so they would be too busy working to rise up against the Egyptians.” 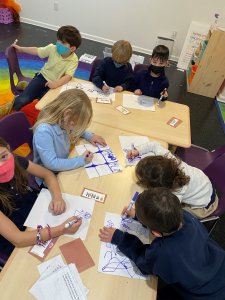 During Shulchanot Avodah (project centers) kiddos unpacked the story in a variety of ways. Some Nitzanim learners embarked on a collaborative lego scene of Mitzrayim (Egypt) during the time of the story. Kiddos were excited to use our brand new lego wall which they recently finished putting together.

“We will need a basket for Moshe!” One student declared. “I am going to work on making the Jewish area. Let’s put the Jewish area on the yellow square and the Egyptian area on the green one to show that the Jews didn’t have lush ground to live on since they were oppressed.” Another learner explained. 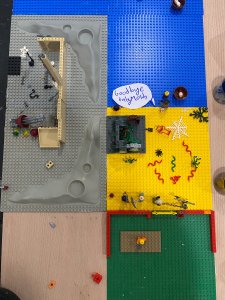 Other kiddos wrote thoughtful diary entries from the perspective of the brave midwives who refused to carry out the Pharaoh’s violent will against Jewish newborns. They took pleasure in soaking and distressing the newsprint to make it appear ancient. 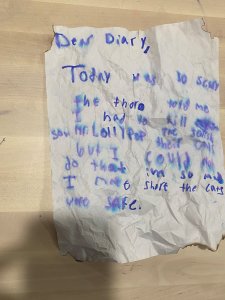 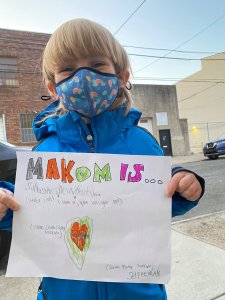 Many were surprised to learn about Moshe’s origins as an Ivri (Hebrew) who grew up as a Mitzri (Egyptian) in the palace. Collectively, we reflected on Moshe’s identity, considering the disparity between how Moshe saw himself and how he was perceived by others. We brought this into our own lived experience as we shared our views of each other and reconciled these views with our self-perceptions. Many were touched and surprised at how others viewed them. 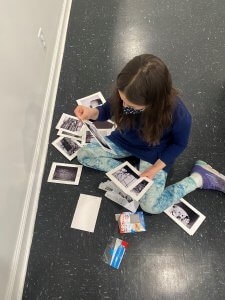 Learners described each other as:

Watching the students come up with thoughtful and kind descriptors of their peers was so beautiful. Next week we look forward to continuing the story as we learn what happens to Moshe after he enters the land of Midian.